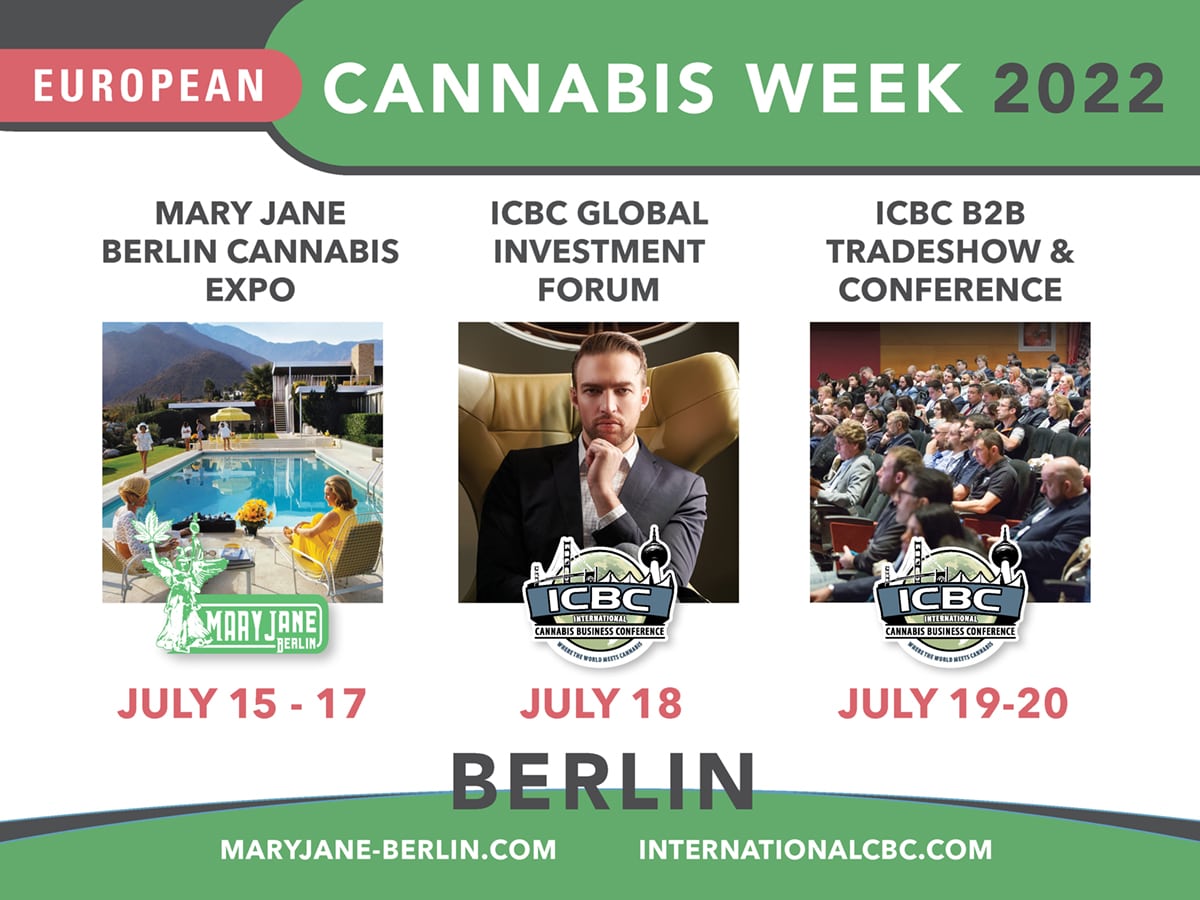 Malta made history late last year when it became the first European nation to legalize cannabis for adult use, and just the third country on earth to make the policy shift. Yet, whereas Malta will not permit legal adult-use sales as part of its legalization model, Germany’s eventual legalization model will include sales according to current proposals from the governing coalition.

Related projections for Germany’s emerging cannabis industry are off the charts. To put Germany’s industry potential into perspective, consider the fact that Germany’s population is roughly twice the size of Canada, Uruguay, and Malta’s populations combined. Furthermore, Germany’s economy, which is the fourth-largest economy on earth, is well over twice the size of the three current legal cannabis nations’ economies combined.

It’s truly an amazing time to be a cannabis enthusiast in Europe, and particularly so in Germany, which is why we are so excited to announce European Cannabis Week in Berlin in July. The International Cannabis Business Conference, the largest and longest-running cannabis B2B event in Europe, is teaming up with Mary Jane Berlin Expo, Germany’s largest cannabis expo, to provide a week of amazing cannabis industry, policy, and entertainment opportunities.

European Cannabis Week will kick off on July 15, 2022 with the start of the Mary Jane Berlin Expo. In Europe, no cannabis expo is growing as fast as the Mary Jane Berlin: Over 220 exhibitors are expected at the event, along with over 27,000 attendees at the venue Arena Berlin & Badeschiff. The Mary Jane Berlin Expo will take place July 15-17th and combines a product exhibition, congress and festival in one. The range of products includes CBD, hemp oil, fertilizer, snacks, vaporizers, dog food, textiles and much more presented on a total area of over 13,000 square meters.

What makes Mary Jane Berlin stand out from other expos is its diverse cultural and entertainment program. The Mary Jane Berlin Festival measures the largest outdoor area ever to be offered by a European cannabis expo: Two festival stages play live music and live acts, the street food area offers culinary (cannabis) highlights and a sandy beach with an infinity pool in the famous Berlin river Spree provides a place to cool off in the hot summer days.

Below is a preview video for the upcoming Mary Jane Berlin event:

“We are particularly excited about European Cannabis Week given the favorable political climate for cannabis legalization in many parts of the continent. It is going to be extra special for our team to offer world-class cannabis industry and policy education, networking, and entertainment to attendees alongside Mary Jane Berlin at such a crucial juncture for Europe’s cannabis community,” says Alex Rogers, founder of the International Cannabis Business Conference.

After the Expo, European Cannabis Week then transitions to the International Cannabis Business Conference which is hosting one of its industry-leading Global Investment Forums on July 18th in Berlin. The Global Investment Forum in Berlin will feature hand-picked cannabis companies participating in a pitch session in front of top investors on the Main Stage.

It is a tremendous opportunity for cannabis companies in the emerging cannabis industry to showcase their products/services in front of seasoned industry investors. The pitch session is also open to service providers looking for reliable and high-end clients.

“We know how hard it is for quality investors to link up with vetted cannabis industry companies offering valuable investment opportunities,” Rogers stated. “That is why we are bringing the Global Investment Forum back to Berlin. It will be a prime networking opportunity for cannabis industry investors, entrepreneurs, and industry service providers alike.”

Following the Global Investment Forum is the two-day International Cannabis Business Conference Berlin B2B event that begins on July 19th. Cannabis industry leaders, policymakers, entrepreneurs, and industry service providers from over 80 countries will be in attendance at the B2B event, making it the perfect place to learn and network. Below is a recap video of last year’s Berlin events:

At the conclusion of the B2B event, attendees will then be able to enjoy one of the International Cannabis Business Conference’s famous after-parties. This year’s B2B event after-party in Berlin will feature the multi-Grammy award-winning reggae band Morgan Heritage. After a long week of learning from true-cannabis experts and networking with cannabis enthusiasts from around the globe, the after-party featuring Morgan Heritage is the perfect way to cap off European Cannabis Week.

The International Cannabis Business Conference is the leading B2B cannabis event series on earth. Events have been held in the United States, Canada, Spain, Germany, and Switzerland. Additional locations in other countries are being identified and will be announced in the future. The topics covered at the Global Investment Forum and conference via panels and presentations will be led by the top cannabis experts in the global cannabis space. Speaker and schedule announcements will be released soon.

European Cannabis Week is going to be the ultimate cannabis experience in the heart of Germany during the middle of summer. Make sure that you don’t miss out and get your tickets to Mary Jane Berlin and the International Cannabis Business Conference as soon as possible before tickets sell out!

This article first appeared on InternationalCannabisChronicle.com and is syndicated with special permission